World Dance Alliance Asia Pacific is sad to announce the demise of well-known dance critic, writer and enthusiast, Dr. Sunil Kothari, who passed away at the age of 87 on 27 December 2020.

Dr. Kothari was the WDA Vice-President for South Asia from 2001 to 2008. He also held the position of Vice-President of the India Chapter from 2008 until the time of his passing.

Dr. Kothari was the Uday Shankar Chair Professor at the Rabindra Bharati University and was also the first Dean of the School of Arts and Aesthetics of the Jawaharlal Nehru University, New Delhi.

Born in Mumbai on 20 December 1933, Dr. Kothari was a qualified chartered accountant before turning his focus to dance scholarship. His contribution as a dance writer and critic remains well documented in more than 20 books on the subject of Indian dance forms, including Sattriya Dances of Assam and New Directions in Indian Dance; on Bharatanatyam, Odissi, Chhau, Kathak, Kuchipudi; and photo biographies of Uday Shankar and Rukmini Devi Arundale.

The World Dance Alliance Asia Pacific remembers him fondly and acknowledges his prolonged association and contribution to the world of dance.

The biannual magazine of World Dance Alliance Asia-Pacific contains reports from our executive committee, our network chairs and our country chapters, as well as updates on upcoming events.

In this edition, we see how dance communities across the Asia Pacific region continue to respond to the challenges of the Covid-19 epidemic, which for many of us has meant settling into digital distribution as the new normal.

… as well as beautiful and inspiring images of dance from across the Asia-Pacific.

With the support of DANZ, the WDAAP country chapter in New Zealand, Associate Professor Nickolas Rowe, from the University of Auckland, along with his co-creators, present the film Dancing7Cities.

The Dancing7Cities team has chosen to make the award-winning feature film Dancing7Cities openly accessible around the world. The film is extremely relevant in current times and explores dance in the public domain, weaving through Laos, Finland, Palestine, Fiji, Australia, Lebanon and Italy. https://youtu.be/BgZwgJ8VjNE

…as well as our usual executive reports, network reports, and country chapter reports. 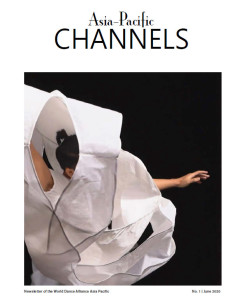 Asia–Pacific Channels is the bi-annual magazine of the World Dance Alliance Asia-Pacific (WDAAP), published by Ausdance National in collaboration with MyDance Alliance in Malaysia. It profiles dance events and activities from WDA members throughout the Asia–Pacific region.

This is a message of hope and aspiration.

As the world reels under the Covid-19 pandemic, we are all confronted with having to adapt to new-normal amidst great challenges to our dance community. Natural disasters such as the Amphan cyclone in South Asia, the bushfires in Brazil and Australia, the global Covid-19 pandemic continue to pose great uncertainties, destroying precious lives and livelihood, causing our robust economies to form into trickles, affecting the arts industry to reach an unprecedented low point.

Nonetheless, our resilience in responding to such calamities has been exceptional, as we engage our dance communities to adapt to the ever-changing landscapes. Our myriad backgrounds and culturally diverse communities have been our greatest reservoir of talent pools for our creative endeavors, time tested and fastidiously honored.

As an independent, non-profit, non-political organization that promotes the recognition, development and mutual understanding of all forms of dance, WDA stands as a united community against all forms of racial inequality, ethnic hegemony and cultural superiority. Dance is Life and lives lived in inequality matter.

The World Dance Alliance (WDA) announces a call for original scholarly articles and performance reviews for Volume 7 of the Journal of Emerging Dance Scholarship (JEDS), from emerging scholars in the discipline of dance. Authors must be currently pursuing a graduate degree (M.A., M.F.A., Ph.D., or equivalent) or be within five years of having graduated (the degree does not need to be in dance, but the article must be focused on dance as an evolving discipline).

JEDS is published online (https://www.jedsonline.net ) as an open access resource and linked through the World Dance Alliance Websites (http://www.wda-americas.net , http://www.wda-ap.org/ and http://www.worlddancealliance.net/ ). Articles and performance reviews are selected to ensure a diverse representation of global dance scholarship is included in each publication.

If you have questions, or would like to make a submission please email the guest editors:

If you have questions, or would like to make a submission please email the Coordinator (Submissions) Dr. A. P. Rajaram: JEDSsubmissions2020@gmail.com

Both of Akram Khan’s parents were born and raised in Bangladesh. He grew up hearing stories of the Bangladesh Liberation War from his family, including his uncle who was a freedom fighter. His mother was studying at prestigious Dhaka University when she went to hear ‘Bongobondhu’ Sheikh Mujibur Rahman at Ramna Race Course on 7 March 1971, calling out to his people to liberate Bangladesh. It was so crowded, she had to step on a rickshaw to try and catch a glimpse of him! Even today she can remember how his words moved her.

For this work, Akram draws on his childhood stories and his families’ sense of national pride to present to Bangladesh the essence of Bongobondhu’s spirit. Using Sheikh Mujibur Rahman’s powerful speech as inspiration, Akram invited composer Vincenzo Lamagna to create the score in this new piece. Akram created an 8-min piece titled Father: Vision of the Floating World that featured as part of the 100-year anniversary of the Father of the Nation, Sheik Mujibur Rahman, on Tuesday 17 March 2020 in Dhaka, Bangladesh. The work was performed by three Akram Khan Company dancers who spent four weeks in a rehearsal residency in the heart of the country teaching the movement to 25 dancers from Dhaka.

“We are living through unimaginable tragedies, in a time that I could best describe as the posthuman era. More than ever, we need to dance with purpose, to remind the world that humanity still exists.”

Go to the official page of International Dance Day, hosted by the International Theatre Institute (ITI), to read the full message, or find out more about Gregory Maqoma.

…as well as our usual executive reports, network reports, and country chapter reports.

Asia–Pacific Channels is the bi-annual magazine of the World Dance Alliance Asia-Pacific (WDAAP), published by Ausdance National in collaboration with MyDance Alliance in Malaysia. It profiles dance events and activities from WDA members throughout the Asia–Pacific region.